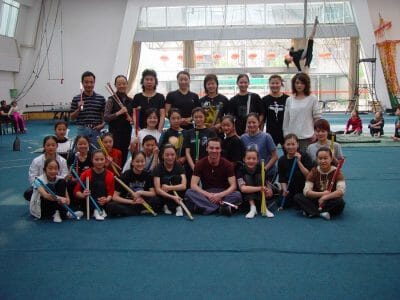 When not performing, Volker Maria Maier also teaches his craft to others. In his capacity as a devil-stick coach, he has travelled to China twice to train members of the Chinese State Circus. His students later achieved world-wide success, performing in the productions of André Heller and Cirque du Soleil (Draleon). Click on the links below to read about his experiences and view some amazing photos of the Chinese State Circus.

In June 1997 I unexpectedly received a letter from China asking me to train some State Circus artists in the art of devil-stick juggling. The prospect of visiting a new country, coupled with the opportunity to look ‘behind the scenes’ of China’s otherwise tightly controlled borders, made me accept the offer without hesitation.

After some negotiation, we organised a nine week visit whereby I would conduct a 1 ½ hour training session each day. I was unable to obtain any further information about the school, my stay or the entry, due to the clandestine political structure of the country at the time. Anyway, three days before my flight was due to leave I received my tickets and other necessary official paperwork, and so I started my international adventure.

The city I was invited to visit is called ‘Kunming’. It is home to one of China’s five State Circus Schools and is located in the southern part of the country, only 1.8 metres above sea-level. The locals call it the ‘City of Everlasting Spring’, which proved to be mostly true – it was all blue skies and sunshine, apart from a brief two week rainy interlude.

I was very warmly welcomed upon my arrival and provided with comfortable accomodation. My first visit to the school was astonishing: there were three massive gymnasiums for training, two workshops for wood and metal, offices, kitchens, a big canteen, a first-aid room, a musician, a painter, a porter, an electrician, serveral chefs, chauffeurs, bosses, directors, …..and, of course, apartments where all these people lived. All in all there were 120 students, and this was regarded as a ‘medium-sized’ school.

Kunming’s Circus School has won many international awards and is subsequantly very highly regarded. Their stellar reputation is largely due to the work of Ms. Li Xi Ning – she’s the school director who made my trip to China possible. She’s also responsible for all the ideas and choreography that win the Kunming school gold medals every year at the International Circus Festival in Paris, and she also assists André Heller with his outstanding performances for the Chinese National Circus. In addition, she’s in charge of organising several large festivals – and she did all the interior decorating in my apartment! Li Xi Ning is in a position of authority within the school and is incredibly enthusiastic about her work. As a result, she was able to produce very modern performances – which was not easy in China during those highly ‘traditional’ years.

On the second day of my stay we started working. My students were a group of about 15 people, between the ages of 15 and 30. They entered the freshly renovated hall and paired up – men at the back, women at the front.

All of my students were well-trained artists with a wealth of previous experience – they’d all worked with André Heller and toured internationally with the Chinese National Circus. And now it was my turn to teach them something new. I didn’t know how to say more than ‘Hello’ or ‘Nice to see you’, but luckily two or three of them spoke a little English and translated for me whenever my hand gestures and broken Chinese weren’t clear enough.

I unpacked the devil-sticks that I’d brought with me from Germany and gave them a brief demonstration of my work. It quickly became obvious to me that none of them had ever worked with devil-sticks before. They especially liked one of my own special tricks, and everyone wanted to learn it straight away. I explained that this trick was ‘for later’, as it requires quite a lot of training. All in all, the first lesson was very successful and everybody seemed to enjoy themselves – including the art director Mr. Li Yong Xi and Ms. Li Xi Ning, who also took part.

During the daily training my students rapidly improved, and after three weeks they were able to perform most of my basic maneuvers so that we could begin working on more specialised tricks. Soon I chose the most talented members of my group and helped them develop new partner-tricks. I knew that within two years they’d be skilled enough to create and perform their own devil-stick show. I always had a lot of fun working with my group and I appreciated the opportunity to work closely with such incredibly talented and dedicated people.

Why did this Chinese state circus school choose a European to teach them the art of devil-stick juggling? I think it’s because devil-stick juggling was neglected for years, and good teachers are therefore very hard to find. Also, Li Xi Ning is a big fan of modern circus techniques and she knows that they’re important for producing successful shows. But the most important reason for finding the highly-qualified coaches is to enable these artists to become the best in the world.

So what is the secret behind the Chinese artists’ amazing skills? The answer is simple: they have optimal training conditions. They train from 7am until 9pm and they are supported by good state healthcare. They exist in an environment where they can concentrate wholly on their work and don’t to worry about administrative things, cooking or earning money to pay the bills. They can, if they want to, retire at the age of 30 or take up another career.

The ‘school doctor’ is responsible for the well-being of all the artists. He always does his best to ensure the artists don’t get sick, and on cold days he brings a large container of old Chinese medicine with him into the gymnasium, and everyone has to drink a mug full of this brown and bitter brew to protect themselves against illness. This procedure reminded me a bit of Asterix and Obelix, but unfortunately the medicine didn’t give me the same strength as Getafix’s magic potion!

For children in China, artistic training begins at the age of seven. You could say that the younger they are, the harder their training is, but in those first few years they’ll learn everything they need to know to begin specialising in particular disciplines. They also attend ordinary schools alongside their circus training. Their training is incredibly hard, but not unhumane and I never saw the children being badly treated. In fact, many of the coaches were like mothers of fathers to the children. As the children grow up so far away from their real parents, the school becomes a kind of surrogate family for them.

The Kunming school teaches all the traditional artistic disciplines, and there are differences between the standard education for males and females. For example, it is compulsory for girls learn traditional Chinese dance and the art of plate-spinning, and afterwards they can specialise in other kinds of performance, such as contortion or trick bicycle-riding.

The jugglers traditionally train with badminton rackets, and because the training is so intensive, most of the jugglers don’t have time to learn other disciplines. Nevertheless, due to the high standard of basic training they receive, they’re naturally able to perform other artistic techniques (such as acrobatics, for example). The juggling training in China is similar to that of Russia: first of all, the students perfect their basic juggling technique, then they learn to keep up to nine rackets in the air. They don’t learn many tricks – for them, it’s more important to be able to perform backcrosses with five rackets.

Sundays were certainly not a day off, although we only had to train in the evenings so I had the opportunity to do some sightseeing during the day. Mr. Li Yong Xi organised some little tours for me, and accompanied me as we visited many temples and parks. I particularly enjoyed wandering around the markets. Most of these trips ended with a meal in a local restaurant. The Chinese love mealtimes and they have a saying that goes: ‘We Chinese eat everything with four legs – except tables’. To this I’d like to add: ‘They also eat things with no legs, and if they believe something is good for their health, then they don’t care if it tastes terrible’. I was never hungry in China; in fact, my plate was always loaded with twice as much food as I could ever eat.

All in all, I really enjoyed my stay in China. Unfortunately, as a result of the daily training, I was tied to the city and was unable to see much of the countryside. Hopefully in the future there will be another opportunity for me to teach in China.

Following an invitation from the Chinese State Circus, I returned to China in Spring of 2004 to resume my role as a devil-stick coach. Not even the of Bird Flu could stop me from returning to the ‘City of Everlasting Spring’ after my five year absence.

Upon my arrival, I noticed that the face of China had changed in many different ways – in fact, it’s still changing now. The winds of change that are blowing through the country made me wonder: where previously there was desolate conformity and stiff obedience, there is now (at least in the metropolitan centres) a pulsing illusion of western culture: garish yellow illuminated fast-food temples proclaim ‘Let’s go West’. Five years ago you would have searched in vain to find the commercial heart of China, but now you can find familiar signs of Western consumer-culture almost everywhere, although they’re always ‘dressed up Chinese robes’. Around every corner you can hear Chinese people speaking English, as if it had always been that way. The communist outlook has seemingly become history – communism still exists in China, of course, but in a different form.

My workplace, the ‘Flag Circus of China’, was also following this new ‘zeitgeist’: with a new, highly modern training hall and plastic palm trees in the entrance to my apartment. My accomodation even included a sauna this time around! These days, the ‘Flag Circus of China’, led by Mrs. Li Xining, is closely connected with ‘Cirque del Soleil’. Here in Kunming, they train all ambitious young artists in preparation for work with the Chinese State Circus, from where they can start building their international careers.

It was my job to coach a group of 20 young artists (women between the ages of 12 and 27) and create a devil-stick show for them to perform at the Chinese Circus Festival at the end of the year. I put them through their paces with some pretty intense training in order to get them to gold medal-standard in time for the festival. The Chinese have a very strong thirst for knowledge and my students convinced me to teach them even my latest tricks. I organised a training routine from the outset, and I taught them technical maneuvers and dance elements at the same time, as we developed the choreography.

In contrast to my last visit, this time I had a personal translator who not only translated the Chinese language for me, but also the local traditions. With my new cultural understanding, the daily serving of fish-heads was thus transformed into a brilliant meal. The only thing that seemed to have resisted the winds of change were the cooks’ aprons. I could swear that they had not been changed during my five year absence, but luckily it didn’t affect the culinary quality of the food!

Although two weeks was an incredibly short amount of time, the eagerness to learn, physical condition and motivation of my students makes me look forward to another coaching assignment in China!

Please give me some information about your event, so I can make you an optimal offer.